Two years ago, Coronado author and historian Joe Ditler released his third book, “Coronado Confidential.” It’s a fun, self-deprecating look at growing up in Coronado during the turbulent 1960s and 1970s.

“I’m thrilled to announce that starting this week, my book joins several other books by Coronado authors, in the ‘Local Authors’ section of Coronado’s Bay Books,” said Ditler, “and we’re discussing… a book signing for early spring or summer.

In his book “Coronado Confidential,” one can’t help but be amazed, bewildered even, by the self-induced twists and turns of Ditler’s curious and often tumultuous life as a teenager growing up in Coronado.

The 1960s revolution erupted around the world, but nowhere near as big as it did on the west coast of California, from the hippie mecca of Haight-Ashbury in San Francisco, to Coronado . Hard to believe, even now.

Half a century ago, the bridge opened up, forever changing Coronado. In its wake came the disappearance of the ferries carrying Coronado cars and the Coronado train. It also spelled the death knell for what was once a quiet little village.

Skillfully and emotionally, Joe Ditler reawakens the memories, music and madness of that generation half a century ago that has left an undeniably lasting imprint on today’s culture and way of life. He was there, and now he is here, to tell his story.

Joe Ditler, a regular contributor to the The Coronado era, Coronado Eagle & Journaland former editor of CORONADO REVIEW, is a former waterfront journalist who has written for international newspapers and magazines for more than three decades. He also worked as a journalist for the Los Angeles Times and served as office manager at The newspaper Newspapers.

He has lived and worked in Coronado since 1967 and has written hundreds of stories about Coronado’s history. He was executive director of the Coronado Museum (CHA) for three years and is known on the island today as one of Coronado’s favorite historians and storytellers.

“Coronado Confidential” is available in hardcover from Bay Books. Autographed copies sell for $25.

Bay Books offers a wide selection of books, from newly published tomes to established, timeless classics. In addition to magazines, newspapers and everything related to the art of reading, they have a huge selection for children, with books and toys for all ages. 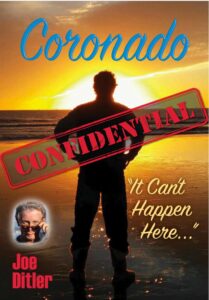 GS Rattan, author of ’10 Steps to the Boardroom’

Wanda Whiteley, author of The Goldhanger Dog shares things she wishes her readers knew about her