MONROE, CT – Oscar-nominated actress Amy Ryan will join in a conversation with John Searles, a New York Times bestselling author who grew up in Monroe, at a party at New York’s Symphony Space, 2537 Broadway, March 22 at 6:30 p.m.

The event, which will be held virtually and in front of a live audience, is a celebration of the release of Searles’ highly anticipated new novel, “Her Last Affair,” published by Mariner Books.

Those present in person must have proof of vaccination and be masked at all times. Tickets are $30 each and include a copy of “Her Last Affair.” To order tickets, go to Symphonyspace.org/events or call 212-864-5400.

Turn the page bookstore in Monroe is participating in the virtual component of this event. Those who pre-order a copy of “Her Last Affair” online or at the bookstore will receive an email with the streaming code just before the event, so they can participate.

Turning The Page is also planning an in-person summer book club for readers, which will be led by Searles. 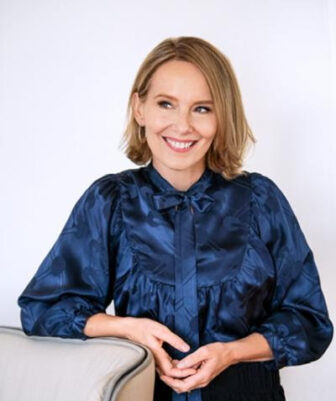 To pre-order copies of “Her Last Affair, Click here or visit the bookstore at 477 Monroe Turnpike on Clock Tower Square.

Ryan, whose resume includes numerous stage, television and film credits, recently starred opposite Joaquin Phoenix in writer and director Ari Aster’s “Disappointment Blvd.” for A24. She also starred alongside Steve Martin, Martin Short, and Selena Gomez on Hulu’s “Only Murders in the Building.”

Searles’ previous novels include “Help for the Haunted”, “Boy Still Missing”, and “Strange But True”, which was made into a movie.

Here is a description of Searles’ new book published on Amazon.com:

Every marriage has its secrets….

Skyla lives alone in the shadow of the defunct drive-in theater she and her husband ran for nearly fifty years. Ever since Hollis died in a freak accident the year before, Skyla has spent her nights brooding over the regrets and disappointments of her long marriage. That is, until she rented a cottage on the property from a charming Brit, Teddy Cornwell….

A thousand leagues away, Linelle is about to turn fifty. Annoyed by her spouse and fired from her job when a dodgy photo from her youth surfaces on social media, her only source of joy is an online affair with her very first love, a man she hasn’t seen. for nearly thirty years, Teddy Cornwell …

While in New York, Jeremy, a failed and bitter writer, accepts an assignment to appraise a new restaurant in Providence. Years ago, Providence was the site of his first great love and his first great heartbreak – and maybe, just maybe, he’ll seek her out when he gets back to town…

Part page-turning thriller, part film noir homage, and dazzling in its insight into the often desperate desires of the human heart, Her Last Affair is a tense, atmospheric novel of love lost and found.

GS Rattan, author of ’10 Steps to the Boardroom’

Wanda Whiteley, author of The Goldhanger Dog shares things she wishes her readers knew about her