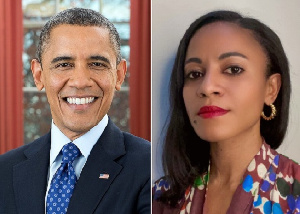 Nadia Owusu is celebrated for her book ‘Aftershock’

On December 15, 2021, the former President of the United States of America, Barack Obama, announced via social media his annual list of favorite books, music and movies.

He captioned the post: “Over the next few days, I’ll be sharing my annual list of favorite books, music and movies.

“Art always sustains and nourishes the soul. But for me, music and storytelling have felt especially urgent during this pandemic year. I’ll start by sharing some of my favorite books from 2021.”

On the list was a Nadia Owusu whose book “Aftershock” was on Obama’s list. GhanaWeb explored who she is and what her book is about.

Nadia’s personal website describes her parentage as “a Ghanaian-Armenian-American writer and town planner.”

She was born to an Armenian-American mother who abandoned her and a heroic Ghanaian father who died when she was thirteen, O magazine said in its review of her book.

His paternal roots go back to the regional capital of Ashanti, Kumasi. His father moved to Cambridge, Massachusetts, where he met and married his mother.

The memoir is written against the usual narrative of “onward and upward” migration. Owusu remembers touring as a child to see the sacred throne of the kings of the Ashanti people of Ghana, the British Guardian review added.

What her website says about herself and her book

His first memoir, Aftershocks, was selected as the best book of 2021 by Time, Vogue, Esquire, The Guardian, NPR and others. It was one of President Barack Obama’s Favorite Books of the Year, a New York Times Book Review Editor’s Choice, and a nominee for the 2021 Goodreads Choice Award.

In 2019, Nadia received a Whiting Award. His writings have appeared or are to appear in The New York Times, Orion, Granta, The Paris Review Daily, The Guardian, The Wall Street Journal, The Literary Review, Slate, Bon Appétit, Travel + Leisure and others.

She is a graduate of Pace University (BA) and Hunter College (MS). She received her Masters of Fine Arts in Non-Fictional Creation from the Mountainview Low Residency Program, where she currently teaches. She lives in Brooklyn.

Author hopes to inspire people to live their best lives