Headphones plugged in and smiling from ear to ear as she answers questions, Hasini Lakshminarayanan makes a big impression when she interviews her peers on a YouTube channel. After all, she is only 13 years old. Its talk shows feature children aged 7 to 17, and these young people have made a difference in areas such as the environment, literature, art and sport.

On February 26, the eighth grader from Chettinad Vidyashram in Chennai added one more feather to his cap as he pulled out his book, The first stepfeaturing 25 top stories from his over 100 featured interviews.

Vice President of India M Venkaiah Naidu and Chief Police Officer C Sylendra Babu wrote the foreword to the book, which was published by Emerald Publishers.

Hasini has many accomplishments to her credit – she is the Youth Nutrition Ambassador for the Government of Tamil Nadu’s Integrated Child Development Program, a speaker for TEDx Youth, a children’s activist, a freelance student journalist and the founder of The First Step, which is the association she runs with 20 other children.

Each of the roles she takes on speaks to the campaigns she is passionate about, including raising awareness of the United Nations Sustainable Development Goals. Like the various people she has hosted on her channel, her areas of interest have also grown.

For example, she was chosen as a Youth Nutrition Ambassador for ICDS as she planned to do something about youth empowerment. “I met V. Amuthavalli, IAS, who is the director of ICDS and our conversations led to this new role,” says the Saidapet resident. Here, she raises awareness of the importance of good nutrition by bringing in experts in the field.

The video interviews are about believing in yourself, accepting compliments with grace, and encouraging others with their story.

Hasini says every member of The First Step, which launched in July 2020 to beat boredom, plays a role in the success of the video series.

Akshath Jaganmohan, who takes the title of publishing director, is an avid reader and he helps Hasini write blogs and transcribe articles. Technical Director Krithik V helps upload the videos to the website and promote them.

Does creating a video require a lot of work? “Yes, sometimes it takes a month,” she says. She has a different set of people helping her every step of the way.

How does she find a representative sample of children across India to interview?

“The first 15 interviews took place through suggestions from friends and supporters and were mostly from Chennai. Once that started I joined LinkedIn and it became easy to connect with more talented children,” says Hasini.

She says her father, Lakshminarayanan, an entrepreneur, sparked an interest in public speaking. Sujith Kumar, founder of the Maatram Foundation, is another source of inspiration.

Her speech at an awards ceremony where she received the “Memory champion” award was what got her into public speaking. About juggling school and a bunch of responsibilities. Hasini says the weekends are usually busy with two or three organizations calling her, but the online classes have benefited her. “When you love doing something and you enjoy the process and trust it, time is not an issue,” she concludes. 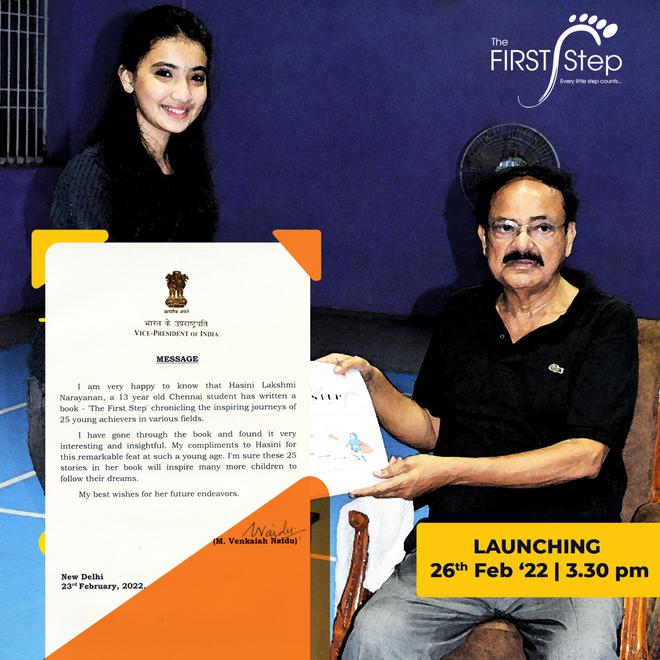