Lyudmila Ulitskaya has been in Berlin since the beginning of March 2022. Like several thousand Russians on the cultural scene, the 79-year-old left her native Russia without knowing if she will ever be able to return.

A fine analyst of Russian society past and present, Oulitskaïa is one of the most acerbic critics of contemporary Russia. His novels and short stories reflect the tragedy of the 20th century, the era of tyranny and genocide. Ulitskaya was one of the first to speak about the Russian war against Ukraine. DW met her in her flat in Berlin.

DW: You’ve been in Berlin for a few weeks, how are you doing now?

Lyudmila Ulitskaya: Actually, I’m fine, although leaving the country means that I now have to learn to live in completely different circumstances. In a way, it’s a rebirth into a new life. All habits, all daily reflexes must change.

I read that your son encouraged you to go to Berlin. Why did you opt for what could be an extended stay away from your native Moscow? Were you in danger?

I didn’t feel threatened and didn’t really understand my son’s decision. But I guess he knows better than me what’s going on today. I remember how I took my sons out of the country when they were of the age when they would have been drafted into the army—it was during the war in Afghanistan. I sent my boys to the United States. So now I’m in Berlin.

DW met the famous contemporary Russian author in her apartment

You have always criticized state power in the Soviet Union, then in Russia. You have often said that this is a characteristic of many Russian intellectuals. Ukrainian author Andrei Kurkov claims the opposite is true, that the Russian writers and intellectuals he has met still have a Soviet mentality. Has he met the wrong people?

It is difficult for me to answer this question: Kurkov has his point of view, I have mine. In my wide circle of acquaintances — I’m not talking about friends, but the many people I know — not a single person would have supported Putin’s war. Not one.

So why does it seem that Russian intellectuals are not really listened to in Russian society?

100 years ago, many members of Russia’s cultural elite emigrated. Does history repeat itself?

For me, this is above all an interesting situation: in 1922, Russian Berlin was an extremely exciting cultural phenomenon. I remember the novel by Viktor Shklovsky Zoo or letters not about love. Today, exactly 100 years later, we could have written a text entitled Zoo 2. It’s intriguing.

There is a long tradition of such letters of protest in Russia. Usually they focus on the government. Some texts are good, others are passable. The result, however, is the same: such letters have no impact on politics. Because the powers that be in Russia are not used to considering or even perceiving society. This is how it always has been and still is today. Above all, intellectuals write them to preserve their own dignity and show the world that not everyone in Russia supports government decisions.

Your literary protagonists are mostly strong, supportive, independent, energetic, and practical women – “everyday heroines.” Where are the real heroines of today?

In fact, women have the upper hand in Russia, everywhere except in government. If this war can be stopped, only women can stop it. If he is not stopped, it means those in power don’t care at all what women think and what they want.

What are the consequences of the war in Ukraine for Russian society?

These consequences will clearly be terrible. I fear that this war will poison relations between our two peoples for at least the next two generations, perhaps longer. It’s a big trauma. I’m not even talking about the economy.

Russians and Ukrainians have close ties. There are many Ukrainian-Russian families and children with mixed identities. In the past, these families usually spoke Russian, now it will be the other way around. Like it or not, Russia is strengthening Ukraine as a political nation – as a result of this war.

My thoughts are with the soldiers’ mothers, Russian and Ukrainian. Because with their sons, we lost the most important thing there is: young lives. 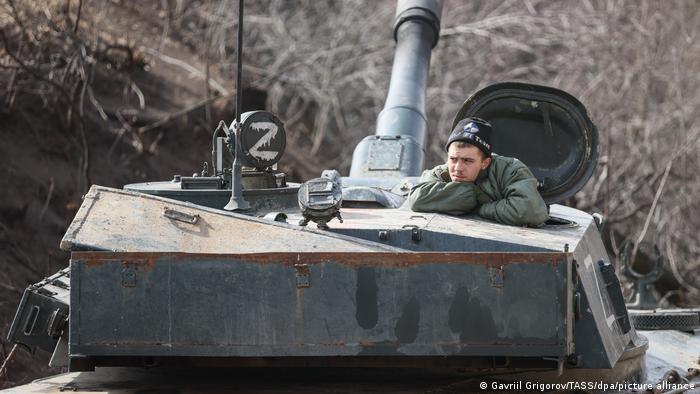 A Russian soldier looks from a tank in the Lugansk region

Russian artists who do not take a clear position against the war and against Putin are internationally isolated. Do you think that’s true? Should artists take a political stand? Isn’t it impossible to wonder what is happening in Russia with people who oppose the regime?

Like everyone else, every artist is entitled to their own opinions, even in politics. An artist should be judged solely on their work, not on their political statements or attitudes. In this context, allow me to remind you of Richard Wagner and his opinions.

A number of artists are leaving Russia, many for Germany. How can we support them?

It is very important for Westerners to understand that the attitude towards the war in Russia is by no means as unanimous among the people as the government likes to portray. A large part of the population, the common people as well as the educated classes, abhor war and would gladly take to the streets against it if it were not so dangerous.

Above all, you are a writer and you want to be seen as such. But at the moment you are asked fewer questions about your literary works than about the situation in Russia and the war in Ukraine. You are a sort of ambassador from the other Russia. Are you satisfied with this role?

No, I’m not happy at all, I would have preferred to continue to be an observer, that’s how I actually define my role as a writer. But life decided otherwise for me.

This interview with Sabine Kieselbach was originally written in German.